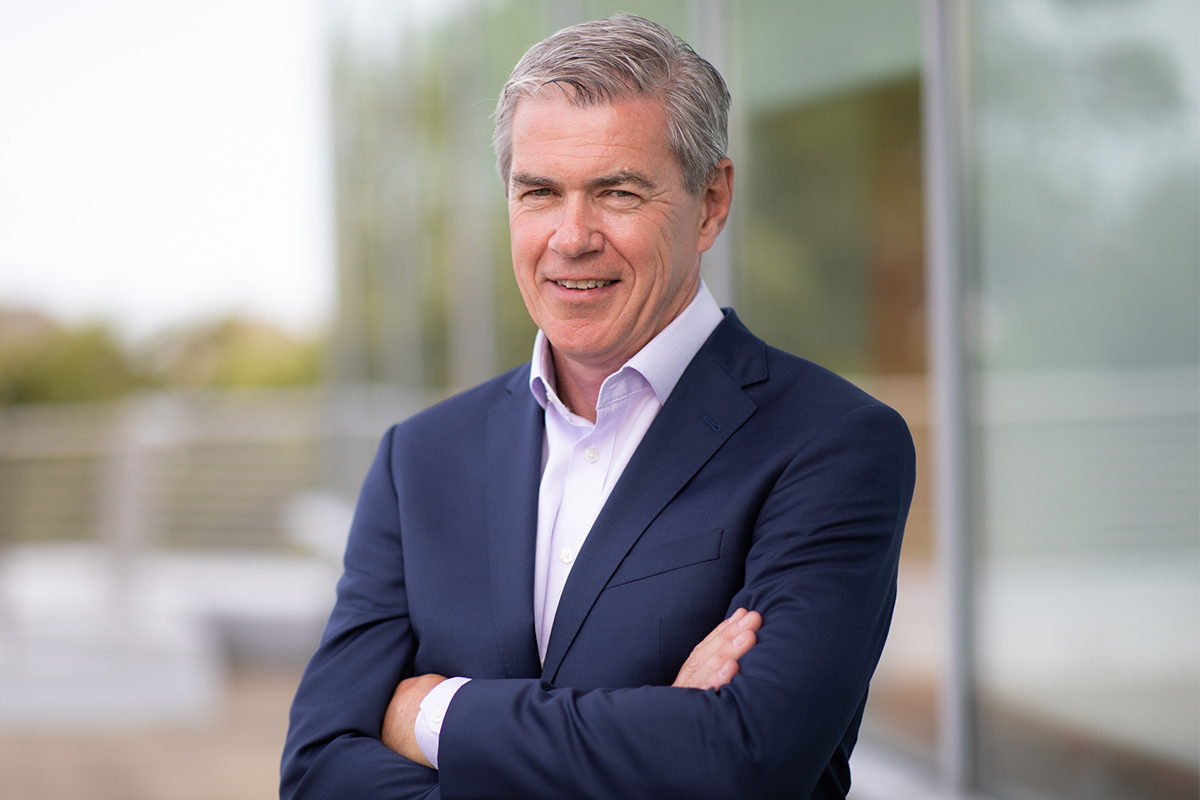 Posted at 18:17h in interview by Author One 0 Comments
0 Likes

EirGrid Group is Ireland’s national electricity transmission system operator (TSO), responsible for ensuring the supply and transmission of power all over the country. EirGrid has started redeveloping the country’s electricity grid so that it will run primarily on renewable energies. How else will it drive the Irish transition to a low-carbon, renewable energy system?

The government’s ambition is to produce an electricity system that is massively driven by renewables and EirGrid is at the epicenter of that. In 2019 we announced an incredibly ambitious strategy that is focused on achieving an average of 70-percent renewables on the power system by 2030. Last year about 40 percent of our energy came from renewables.

Six big things must happen for us to reach our target. Firstly, we must connect an awful lot more renewables, maybe approximately 10,000 MW. We currently have approximately 5,000 MW across the island of Ireland, north and south. We need to add another 10,000 MW. So, the first task is to do in 10 years double what we did in the last 15 to 20.

Secondly, we must upgrade the grid. On the one side you have demand for electricity rising, on the other you have generation—we’re the bit in the middle that connects it all and makes it happen. One of our big objectives is to make sure we have a grid that can connect all of the new renewables with the demand sources.

Fourthly, we have to put in place the technology, electronics and sophistication to allow a renewables-based power system to work. Renewable power is different from conventional generation in terms of its attributes, it’s less stable. We have to do very sophisticated tricks with electronics to ensure the system remains stable and doesn’t collapse when it is loaded with renewables.

Fifthly, we must engineer an evolution in the market to make all of this work together. We crucially need private-sector investment. Generators need to be incentivized to build generation plants. Service providers need to be incentivized to provide services to keep system stability, such as batteries. The market must evolve to support this transition and allow in private investment.

The sixth and last point is about the ethos and philosophy of the company; we want to be an exemplar in how we do our business on a day-to-day basis and be a low-carbon company in terms of how we operate and how we behave.

Ireland currently has one of the highest electricity tariffs in the European Union (EU). Do you foresee these upcoming developments changing this situation?

Ireland has gone from no renewables to 40 percent in the last 15 years and the price of electricity has not gone up. Despite our exposure to the commodity pricing of gas, oil and other conventional fossils, we’ve managed to keep the price stable and that’s because the marginal price of renewables is effectively zero. I think the long-term outlook for Ireland is for very competitive electricity on the back of our own natural resources.

In January 2021, EirGrid announced that it successfully managed to hit a supply of 70 percent of electricity from variable renewable sources. How significant is this new milestone and what kind of an engineering success does it represent for EirGrid?

It’s very significant. Nobody else in the world is doing it, so I suppose it doesn’t get any more significant than that. In the broad spectrum of engineering achievements in our sector and across the globe, it’s right up there with the top TSOs in the world. We’re working very closely with people from Texas to California, Australia and the U.K. that share this common purpose and ambition. They may not have achieved quite as much as we have because we’re not on a continent landmass, so we just have to do it a little bit more quickly than others. Necessity is the mother of invention!

The Irish wind energy sector has traditionally been focused on onshore. But the government now aims to leverage the country’s considerable offshore potential, with targets for 5 GW of bottom-fixed offshore wind by 2030. What are the technological implications of offshore expansion for the grid? What new capacity and infrastructure will need to be developed?

We’ve got a phenomenal ecosystem in offshore and onshore wind. To achieve what we need to achieve by 2030, we must bring offshore wind into the mix here.

It’s fundamental to Ireland’s overall ambition to build 5 GW of wind farms in the Irish Sea. It’s what will unlock the dream or the ambition of 70-percent renewables by 2030. Up to 2030, the Irish Sea presents the great opportunity and has three really good advantages: firstly, developments are close to the shore, only 12 kilometers out; secondly, the biggest electricity demand is in Dublin, so you’re building generation very close to the demand; and thirdly, the grid is, in relative terms, stronger on the east coast.

EirGrid recently launched its ‘Shaping Our Electricity Future’ initiative, with a nationwide, 14-week public consultation aimed at informing and receiving feedback from the public about changing the electricity landscape. How important is it for you to educate and involve your consumers?

The biggest challenge is how do we get the people of Ireland to make the necessary shift. While 99 percent of people accept the climate change reality, and most are disposed to understanding how we fix this, there remains an education challenge in helping people understand the connection between the new world in 2030 and beyond, where we live a carbon-free life. This is a problem in Europe and right around the globe.

How we convince ordinary people—from the youngster to the elderly person—that you need wind turbines, you need wires, you need charging stations for cars and so on. The wind farms and the infrastructure that EirGrid will position close to where we live are what’s going to enable a liveable world for us and for the next generation; a world that is free of carbon. That is the greatest challenge for politicians, leaders like me and people who want to sponsor a change to our society and the way we work.

I think we’re reaching out in a way no other company in Ireland has ever done before. We are going far and wide across the island of Ireland to try and engage ordinary people. Ultimately, people philosophically don’t understand what the future looks like and they don’t understand what the pathway is to get there. We’re trying to bridge that gap with Shaping Our Electricity Future, so people can relate to what the journey looks like and, hopefully, have an informed and intelligent conversation about that pathway.

Through its Innovation Programme, EirGrid develops new solutions to help manage the power system. What have been some recent, exciting innovations that you have introduced, in terms of infrastructure or storage?

What is really interesting is the technologies that will come next. Beyond the transmission system into what’s called the distribution system and into our homes; those technologies that are smart enabled, like smart meters and so on. These will allow efficient and intelligent deployment of electricity at consumer level in the next decade. For example, you plug your car in when you come home in the evening. All a consumer should care about is that, when they leave home the next morning, that the car is charged. You shouldn’t have to care about whether it’s done between two and four in the morning when the wind is blowing. That’s the next layer of technology. There’s a universe of technological enablement coming down the tracks and the key thing is that we deploy it in the cleverest way.

One of the major projects you’re working on at the moment is the Celtic Interconnector, which will enable direct electricity exchange between France and Ireland and which will have a capacity of 700 MW. How important is this project in terms of safety, security, competitiveness and sustainability?

The Celtic Interconnector is one of the most important projects from Ireland’s perspective over the next decade. We’ve sadly lost the U.K. from the EU, and with that we’ve lost our connection with Europe. I cannot overstress the importance of the Celtic Interconnector in giving us a link back into Europe. I’m deeply grateful for the support of our French colleagues at RTE, which is our partner on the project, and the European Commission, which has given the project over 50-percent grant funding to help us make that connection between Ireland and Europe.

It’s absolutely critical for a number of reasons. First, it gives us a bridge into Europe. Secondly, if Ireland is going to build another 10,000 MW of renewables as part of our economic ambitions, we may be able to export that production. The Celtic Interconnector is critical so that we can send a lot of energy to France and not have to turn off power plants because they have nowhere to send their energy. Thirdly, we will have the benefit of being able to call on our French colleagues when the winds are not blowing in Ireland to get the energy we desperately need from the French power system. This project is a win for Ireland, it’s a win for France and it’s vital to our national power security long term.

With the return of an environment-friendly administration in the U.S., how is EirGrid developing or redeveloping its cooperation with that country? And what value do you put on global partnerships overall?

Partnerships are center stage in our strategy. We’re part of what’s called the Global Power System Transformation (GPST) initiative that comprises some of the top electricity system operators in the world, including those from Texas and California. We’re looking to collaborating and combining our resources and our intellectual property to get to 100-percent renewables. The U.S. is coming back onto the world stage with a disposition to again work collaboratively and seek friends in Europe. That is phenomenal. The U.S. is back to reaching out and not being an insular player.

All the top U.S. ICT companies are in Ireland. They are deeply embedded here. They see Ireland as their gateway into Europe and they continue to embed more and more in line with the data-center phenomenon, which has changed all of our ways of life in the last 12 months. We have to work closely with them to make sure their expansionary ambitions are met, so this more open environment with the U.S. and with ICT companies is very welcome. They’re bringing a philosophy of low carbon, which we’re very happy to work with.

You’ve been heading EirGrid since 2018. After those three years, what is your vision for the power industry of the future and how confident are you that Ireland can meet its energy targets?

My ambition is to deliver 70-percent renewables by 2030. That’s the objective we set. We spent a year coming up with a strategy and we have now moved from vision to delivery. My absolute focus for the upcoming years is on the delivery building blocks that ensure we’re not saying in 2030 that we missed the road. It’s actually the things that happen in the next two to three years that will determine whether we achieve our 2030 target. I’ve reconstructed my organization and built the partnership model that ensures we get a huge part of the job done by 2025, because if we do that, we know 2030 is secure. That’s the vision clear and strong. It’s now about delivery.

What’s your final message to our Newsweek readers?

When the COVID-19 pandemic ends, hopefully in the near future, I believe the number one matter of public discourse will be dealing with the climate change problem. Time is running out. The technology is substantially here. If leaders stand up now and take the correct action, if they win the hearts and minds of people, we can have the impact that’s necessary in the next eight to 10 years in order to protect the planet for our children and grandchildren, but we must act now.